In 1813-1814, William Cary, having migrated from New Hampshire to Cincinnati in 1802, purchased 491 acres north of Cincinnati along what is now Hamilton Avenue. Cary built a log cabin and moved his family to this "wilderness," then known as Mill Creek Township.

The area became a wealthy suburb called Pleasant Hill, but later adopted the name College Hill because of several schools that were established there in the nineteenth century: Cary's Academy for Boys was established in 1832 and soon became Farmers College. It was later named Belmont College and still later taken over by the Ohio Military Institute. Also, the Ohio Female College operated in the area from 1849 to 1873.

Soon after, William Cary purchased an additional 75 acres north of North Bend Road adjacent to his original tract, and sold part of it to his nephew Robert Cary. Robert initially erected a small frame house for his family, then in 1832, built the white, brick house now known as Cary Cottage. 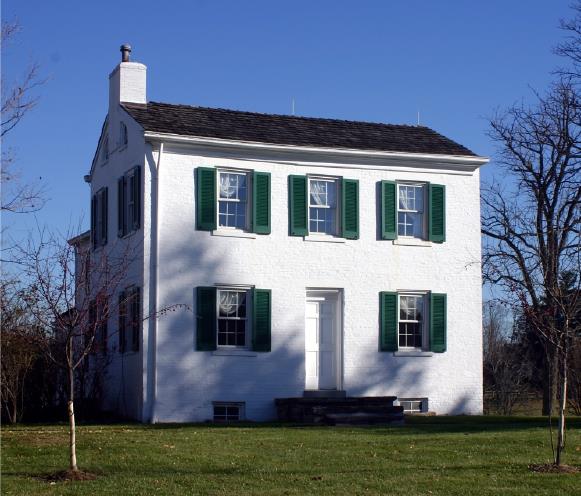 Robert Cary and his wife Elizabeth raised 9 children, 2 of whom, Alice and Phoebe, became well-known poetesses and writers. Both girls began having their poems published as teenagers, and they eventually counted among their admirers Massachusetts poet and abolitionist John Greenleaf Whittier, New York Tribune newspaper editor Horace Greeley, and author Edgar Allan Poe, who pronounced Alice Cary's Pictures of Memory, "one of the most musically perfect lyrics in the English language."

Cary Cottage became the first home for blind women in Ohio through the work of the Trader sisters, Florence and Georgia, who was blind. In 1903 the Cary house and the land surrounding it were purchased by William Procter, grandson of the Procter and Gamble cofounder, in order to give them in trust to the Traders. The sisters used the land to establish Clovernook and provide employment to visually impaired women as a source of dignity and direction.

Today, the Clovernook Center for the Blind and Visually Impaired offers instruction, employment, community living and low vision services for men and women, and runs 3 manufacturing departments, including one of the world's largest volume producers of Braille publications.