Create an Account - Increase your productivity, customize your experience, and engage in information you care about.

In the latter part of the 19th century, North College Hill was the home of Dr. Isaac Mayer Wise, who has been called "the most prominent Jew of his time in the United States" for his influence as one of the early leaders of Reform Judaism in America. The son of a rabbi, Wise became a rabbi himself in Bohemia (now part of the Czech Republic) 2 years before moving to Albany, New York in 1846 in pursuit of religious freedom. In 1854 Wise accepted an appointment to serve as the rabbi of the Reform congregation Beth Eichim in Cincinnati and remained in that position until his death in 1900. Following Wise's death in 1900, the farm was the home of his daughter and granddaughter, respectively, until 1968.

In 1861 Wise and his wife Therese bought a 40-acre farm near the current intersection of Goodman and Hamilton Avenues and raised a family of 10 children. The farm is reputed to have given Dr. Wise great delight since land ownership was extremely uncommon among Jews in Europe. Known as an organizer and a uniter of American Jews, Wise played a huge role in the establishment of the Union of American Hebrew Congregations and the Central Conference of American Rabbis. He also served as president and teacher at the first Jewish seminary in the United States - Hebrew Union College in Cincinnati.

North College Hill's mayor attracted national attention for a very different reason in the 1920s. From 1920 to 1933 the prohibition of the manufacture, sale and transportation of alcohol in the United States profoundly affected the life of the nation. 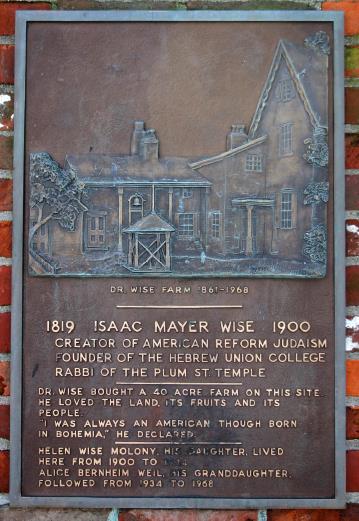 Many American towns, including North College Hill, saw frequent raids during this time to enforce "dry laws." The fines that were levied as a result became a substantial source of income for many municipalities and their officials. In 1925 the Mayor of North College Hill was involved in a prohibition case that rose to national significance and continues to have an impact on legal matters today. The case started in 1925 when North College Hill Mayor A. R. Pugh led a raid on the home of White Oak resident Ed Tumey and charged him with alcohol possession in violation of the Ohio prohibition law. When Tumey appeared in court, the prosecutor was.. .Mayor Pugh. And the judge? Also Mayor Pugh! This arrangement allowed Pugh to benefit from his own decisions since convictions rewarded Pugh with a fee and acquittals did not. Tumey claimed that this denied the defendant a fair hearing and moved for dismissal. Pugh denied the motion and fined Tumey $100 from which he received a fee of $12 for acting as judge.

The case was appealed and eventually made it all the way to the United States Supreme Court, which was then headed by Cincinnati-born Chief Justice William Howard Taft. When the court issued its decision in Tumey's favor on March 7, 1927, the case provided one of the first breakthroughs in the repeal of prohibition by helping to strike down a municipal system whose self-interest denied citizens their right to the "due process of law" guaranteed by the Fourteenth Amendment. The court's decision in this case continues to provide precedent today in many cases involving judicial impartiality.